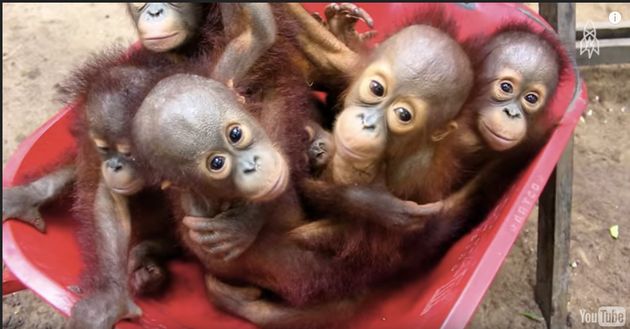 A rescue center for orangutans in Ketapang, Indonesia focuses on the basics, so much so that it refers to itself as “baby school.”

“We come across orangutans that are kept as pets illegally, we also rescue them from the habitat that is disappearing,“ program director Karmele Llano Sanchez said. “What we have to do is teach them how to survive in the wild.”

Earlier this month, a baby orangutan called Boyna that was rescued by International Animal Rescue started baby school as a 1-year-old. The orangutan had been kept as a pet since she was found in the forest.

“Baby orangutans like Boyna suffer terrible trauma when they are snatched from the forest and taken into captivity,” International Animal Rescue executive Alan Knight said in a press release. “As with so many of the orphans in our care, we will never know exactly what happened to Boyna before she was found alone in the forest. But she is in safe hands now and settling in well at baby school at our orangutan centre in Ketapang.”

As HuffPost’s Dominique Mosbergen reported last week, the killing of orangutans is a common crime in Borneo, though it is rarely prosecuted. International Animal Rescue suspects many orphaned baby orangutans who end up in their care have watched their mothers die in the rain forest.