For 28 years, communist-controlled East Germany was cut off from the capitalist enclave of West Berlin by a barrier of concrete, barbed wire and heavily armed guards.

The first barricades of what would become the Berlin Wall sprung up in August 1961, after the number of East Germans leaving the GDR via West Berlin reached record heights. For the next three decades, the barrier would divide families and neighborhoods that once shared the city.

On Nov. 9, 1989, the wall came down almost as quickly as it had first appeared. When an East German official prematurely announced the opening of the border, thousands of elated East Germans headed to the Wall and started ripping it down piece by piece. British academic Timothy Garton Ash described the scene as "the greatest street party in the history of the world."

The Wall was a lethal barrier in the three decades it stood. Border guards were under strict orders: “Don’t hesitate to use your weapon even when border breaches happen with women and children," one East German secret service file from 1973 read. At least 138 people died trying to cross the border.

While some did make it safely across, it is unclear how many people exactly reached the western part. Some estimates claim that 5,000 East Germans reached West Berlin via the Wall. Men, women and children snuck through checkpoints, hid in vehicles and tunneled under the concrete.

To celebrate the 25th anniversary of the fall of the Wall, we dug up 10 of the most brazen and brave ways that people attempted to escape East Germany. 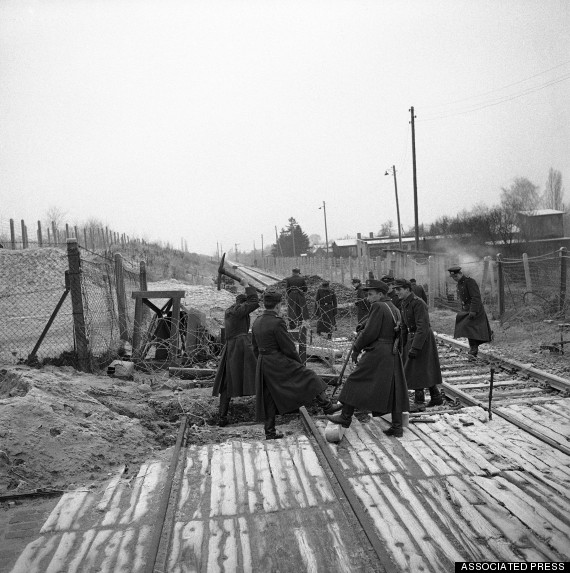 East German police use picks and shovels to tear up railroad tracks used by Harry Deterling to drive a train into West Berlin on Dec. 5, 1961. (AP Photo/Bought)

Four months after the Wall was first erected, a young railroad engineer in East Berlin spotted a gap in the barrier. Harry Deterling discovered a disused train track that still ran from an East Berlin suburb into West Berlin. Deterling promptly signed up to drive the train on the nearest route and plotted "the last train to freedom." On Dec. 5, 1961, Deterling brought his family and friends on board, drained the air from the train's emergency brakes, and steamed at full throttle towards West Berlin, sending startled border guards flying. Once on the other side, one of the passengers rang West Berlin's police to inform them: "We've just escaped with a train." East Germany blocked the railway line the next day. 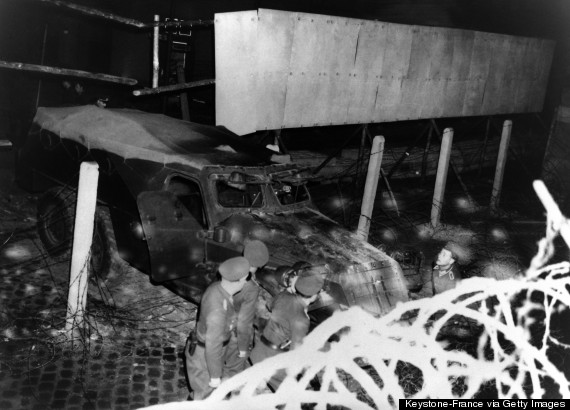 An image of Engel's armored vehicle after it smashed into the Berlin Wall, April 19, 1963. (Keystone-France/Gamma-Keystone via Getty Images)

East German soldier Wolfgang Engels may have helped to build the Berlin Wall in 1961, but two years later he, too, plotted his escape. It wasn't the best-laid plan, The Local recounts. On April 16, 1963, Engels stole an East German tank and smashed it into the concrete barrier, crying: "I’m getting out of here to the West, anyone want to come along?” The vehicle failed to break through the Wall. Engels got out and tried to climb over it, but got stuck on the barbed wire and was shot twice by East German border guards. Eventually West Germans who had been drinking in a nearby bar came to his aid and helped him down from the barbed wire. Engels later described to The Christian Science Monitor how he regained consciousness on the bar counter. "When I turned my head and saw all the Western brands of liquor on the shelf, I knew that I had made it," he said. 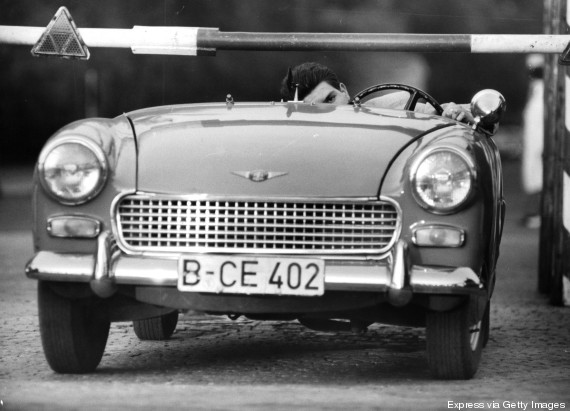 This is how Heinz Meixner drove his Sprite car without the windscreen so that it would be low enough to run under frontier posts in Berlin, Germany, circa 1961. (Express/Archive Photos/Getty Images)

It was love that prompted Heinz Meixner's daring scheme. While working in East Berlin, the Austrian fell for Margarete Thurau, but authorities denied her permission to marry him back in his home country. Meixner decided to get her and his future mother-in-law out on his own terms. He hired a convertible, removed the windshield and let a little air out of the tires to bring the vehicle even lower to the ground. On May 5, 1963, with Thurau and her mother hiding in the back, Meixner drove the car to the border post dubbed Checkpoint Charlie. When Meixner reached the inspection point, he ducked and stepped on the gas, pelting right under the barrier into West Berlin. 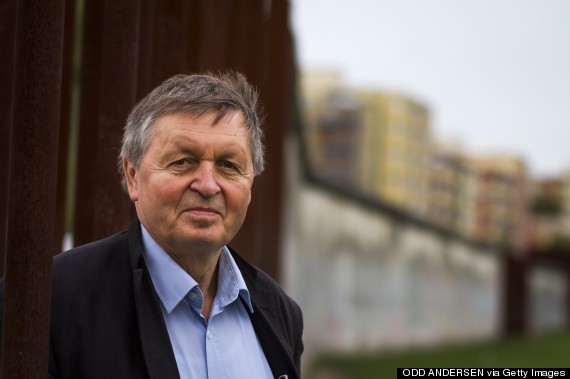 Hartmut Richter poses for pictures along remains of the Berlin Wall along Bernauer strasse on Oct. 8, 2014. (ODD ANDERSEN/AFP/Getty Images)

In 1966, 18-year-old Hartmut Richter swam for four hours across the Teltow Canal to elude East German border guards and reach West Berlin. "A swan attacked me, dogs were barking, I had to wait several times and dive underwater until the coast was clear," Richter later told Agence France Presse. "I had hypothermia and was exhausted when I finally made it, and passed out on shore." A few years later Richter returned to East Germany and started smuggling out friends in the trunk of his car -- more than 30 people escaped with his help. In 1976 he was caught and sentenced to 15 years imprisonment. West Germany secured his release after four years in jail.

5. ON AN AIR MATTRESS 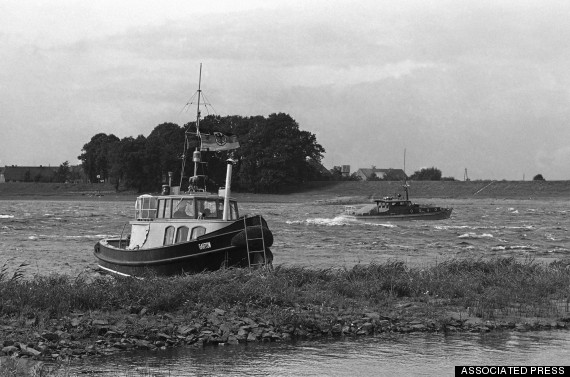 Ingo Bethke became familiar with the banks of the River Elbe, north of Berlin, while serving as an East German border guard. When he decided to flee East Berlin in 1975, Bethke returned to the river with a friend and an air mattress. First, they had to navigate through a metal fence, over trip wire and and across a mine field. But the pair did reach the river, where they silently paddled on the mattress into West Germany.

Ingo Bethke's family came under scrutiny by East German authorities after his defection. His brother, Holger, eventually decided to follow him and plotted an equally daring escape. Holger trained up in archery and found a tall building that overlooked West Berlin. In May 1983, he snuck into the attic and shot a wire cable over the Wall using a bow and arrow. Ingo was waiting on the other side and fastened the wire to his car. With a metal pulley, Holger rode the zip line high above the wall and joined his brother in West Berlin. 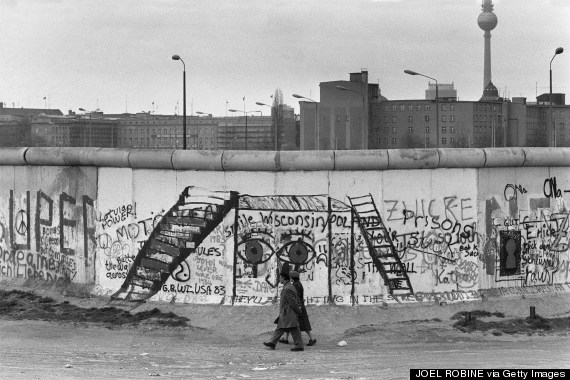 Graffiti on the West Berlin side of the Berlin Wall on April 29, 1984. (JOEL ROBINE/AFP/Getty Images)

The two brothers then hatched their most audacious plan yet in order to extricate their third brother, Egbert. They learned to fly, and painted two ultralight planes with Soviet-style red stars. In May 1989, they were ready. They dressed in military uniforms and flew the planes clear over the Wall into East Berlin, picking up a waiting Egbert and whisking him back to the West. The brothers had been separated for over a decade. "I thought I’d never see my brothers again but they came out of the sky like angels and took me to paradise,” Egbert later recalled. 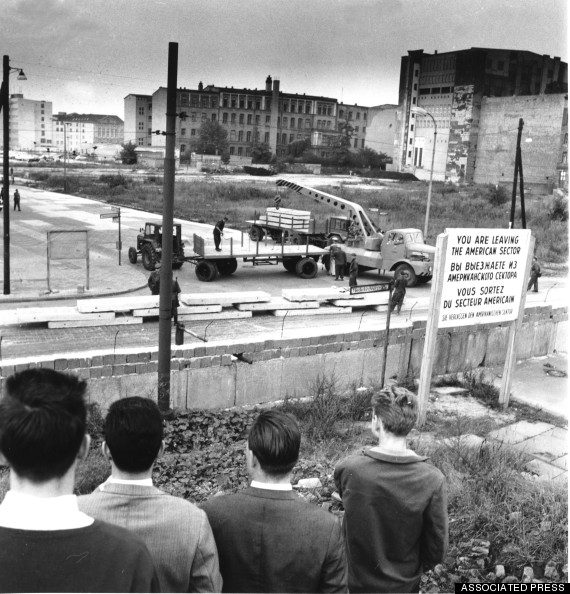 Aircraft mechanic Hans Peter Strelczyk got his inspiration for his escape from an East German TV program on the history of ballooning. Together with his friend Gunter Wetzel, he made a hot air balloon to carry both families into the west. The friends built the engine from propane cylinders and their wives stitched together bedsheets for the balloon. After a failed first attempt, the two families finally soared over the Wall on Sep. 16, 1979, landing after 30 minutes in a blackberry bush on West German soil. 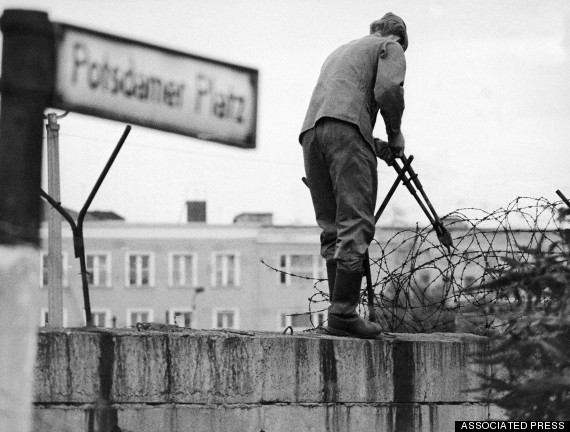 At Potsdam square, an East German soldier snips away at barbed wire atop the wall dividing Berlin, Germany on Aug. 12, 1966. (AP Photo/Herrmann)

Trapeze artist Horst Klein was banned from performing in East Germany because of his anti-communist beliefs. So, he used his tightrope skills to flee to West Berlin. "I couldn't live any longer without the smell of the circus in my nostrils," Klein told newspapers at the time. In December 1962, Klein scaled an electricity pole near the Berlin Wall and, dangling high above the guard patrols, inched his way across a disused power cable. His hands numb from cold, he fell from the rope and broke both of his arms, but he had landed inside West Berlin. 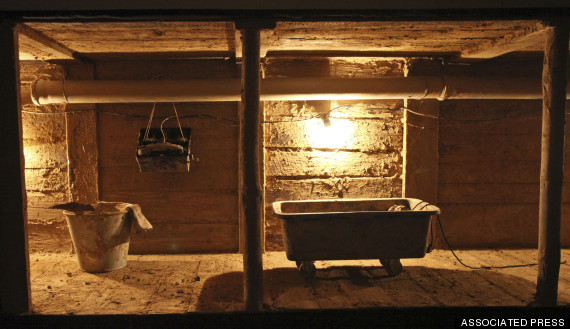 A model of an escape tunnel from East to West Berlin at the Underworlds museum in Berlin, Germany, Sept. 11, 2009. (AP Photo/Maya Hitij)

Several hundred East Germans escaped through a secret tunnel network under the Berlin Wall. In 1962, around a dozen elderly East Germans dug their way out of Berlin through what was later dubbed the "Senior Citizens Tunnel." Over two nights in 1964, 57 people escaped through another tunnel, which became known as "Tunnel 57." It was the largest mass escape in the Berlin Wall's history.