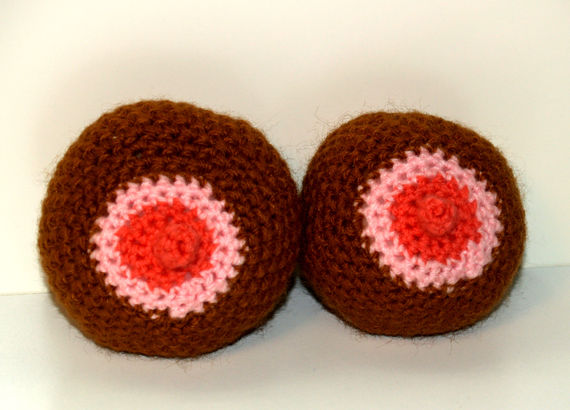 Big Breasts? A Blessing or a Curse?

My best friends from childhood matured early and soon became what is known in the vernacular as "stacked." Whether they would trade their oversized ta-tas for more moderately sized sisters was a frequent topic of conversation at our Friday night slumber parties. The consensus: Definitely.

Fast forward many, many decades. I recently decided to ask my well-endowed friends to look back at their adolescence and how their breast size affected their teenage experience. The following are some of their observations and ruminations concerning their oversized ta-tas during those formative years:

Friend #1: Sprouting in 5th grade like fast-growing weeds, my ta-tas skipped the training bra stage and slid right into an A cup size, to my mother's horror. One day I was playing with dolls and the next I was surveying my silhouette in the full length mirror on my closet door -- tummy tucked in and shoulders straight. It was quite a sight. And it scared the hell out of me.

Friend #2: My dad promptly became the Sultan of Surveillance once my ta-tas started peeking conspicuously through. He now eyed all my male neighborhood buddies and kickball pals with open suspicion. I, too, was suspicious -- suspicious of the large bumps suddenly jutting out underneath my previously loose button down blouses. What was I suppose to do with them?

Friend #3: I continued to wear my thick cotton undershirts over my bra. To no avail. The boys in my class continuously stared at my ever-ripening chest, no matter how modestly I dressed.

Friend #4: I got my bra straps snapped in the halls of junior high school all the time.

Friend #5: Quickly climbing the alphabet in cup size, my previously athletic and trim body transformed itself into an hourglass of curves. I lost the ability to run like the wind. And I lost the innocence of an anonymous childhood too.

Friend #7: Forget push-up bras to enhance my cleavage. My sisters were spilling out everywhere. And my shoulders soon developed life-long deep grooves from the weight of my bra straps.

Friend #8: I learned to avoid empire waist dresses and high-waist pants. And I routinely came close to suffocating in yoga class when my large breasts simply prevented me from breathing deeply -- and sometimes at all -- while executing all those yoga poses.

Friend #9: Forget jogging, sleeping on my stomach, going bra less, wearing backless sundresses and flawlessly executing jumping jacks. All things I used to be able to do with wild abandon.

Friend #10: My friends with moderately sized ta-tas had a vast array of brassieres to choose from in a vast multitude of colors, styles, and patterns. My bras were beige, heavily under-wired construction wonders that screamed "industrial strength." Not even grandpas would find them appealing.

Here's a new slant on the topic of "Is Bigger Better?" Research has been recently conducted on 1,200 women, by Chicago sociologists, who found that women with big busts average 10 IQ points higher than less well-endowed women. Lead researcher Dr. Yvonne Rossdale, herself a meager 32A, says, "The myth that women with voluptuous figures are not smart should now be shelved."

Dr. Rossdale measured the busts of women in Illinois, Kansas and Ohio and found that women with a cup size of D or larger scored an average of 10 points higher than women with size A or B cup size. Experts aren't sure why bigger headlights translate into more brain power. "One theory is that the female hormone estrogen, responsible for breast development, may also play a role in intelligence," Dr. Rossdale says.

Call them melons, jugs, a rack or knockers, my friends have been lugging around these sisters for over 58 years. "So, after informing them of the recent research, I asked again, "Which is it? Are big breasts a blessing or a curse?"

The consensus: my friends, now matrons in their 50s and 60s, are thankful for their top drawer endowments now that they are decades past adolescence angst.

"Let's face it," one of my more exuberant friends replied. "Men adore them. And me? I've learned to love my humps too -- once I got over the initial shock of their ubiquitous presence, that is. And, if I'm smarter because of them, that's an added bonus or two."

Draw your own conclusions regarding breast size preference. Comments, of course, are always welcome...

If you want more information about Iris's forthcoming book Tales of a Bulimic Baby Boomer, or to sign up for her weekly newsletter, visit www.irisruthpastor.com or follow her on Twitter @IrisRuthPastor.

You can find more from Iris on LinkedIn.