42% of Americans hold the creationist belief that God created humanity as it currently exists a mere 10,000 years ago, according to a Gallup poll from May 2014. 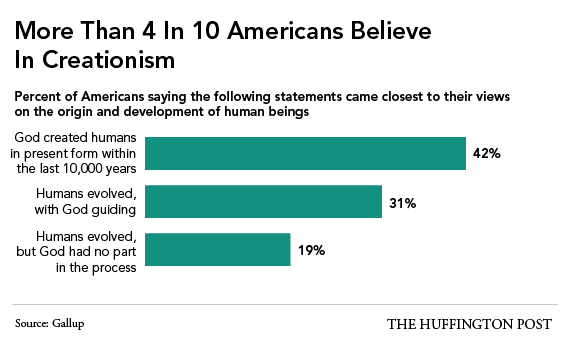 The Gallup data shows that a distinct majority of Americans have held the belief that God played a role in human origins since they first started asking the three-part question in 1982. The question stated:

The religious and educational backgrounds of survey respondents correlated strongly with their answers as well as age. More religious people were dramatically more likely to indicate that they believed in creationism, as well as people over the age of sixty-five. Higher levels of education corresponded with a stronger belief that God was not involved with creation, but over 25% of college graduates do believe in creationism, according to the study. 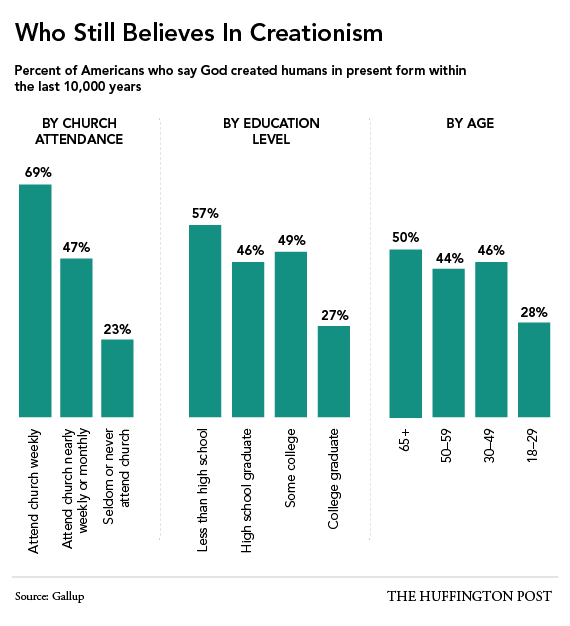 The belief in creationism is also influenced by regional factors. Gallup reports that residents of the South are more likely to hold creationist views than in other places.

Dr. Brian Alters, the president of the National Center for Science Education's board of directors, has emphasized that the consensus of scientific community is decidedly in favor of evolution.

"Overall, the nation has a big problem," he said in 2006. "Approximately half of the U.S. population thinks evolution does (or did) not occur. While 99.9 percent of scientists accept evolution, 40 to 50 percent of college students do not accept evolution and believe it to be 'just' a theory."

Survey data came from telephone interviews between May 8-11, 2014, with a random sample size of 1,028 adults aged 18 or older. The sampling error is ±4 percentage points, with a confidence level of 95%.

Christians Who Believe In The Science Of Evolution
Suggest a correction
More:
Evolutiongallup pollreligiongallup surveycreationism