It’s less than eight months into 2016 and the ominous day is already nearly upon us: Earth Overshoot Day, previously known as Ecological Debt Day, is a reminder of the enormous toll we take on the Earth.

The day marks the juncture when humanity’s demand for ecological resources exceeds what the planet can replenish annually. In 2016, it falls on Monday, which means people have already consumed an entire year’s worth of the world’s resources ― and we still have four months to go until the year’s end.

For the rest of 2016, we’ll be “living on resources borrowed from future generations,” as the World Wildlife Fund pointed out when we failed last year.

Troublingly, this year’s Overshoot Day is happening earlier than ever before.

Humans have gone into “ecological debt” earlier and earlier in the year since the 1970s, according to data from the California-based think tank, which hosts Earth Overshoot Day every year.

In 1971, Overshoot Day fell on December 24. Ten years later, it had moved ahead by a month to mid-November. It’s arrived in August since 2005. 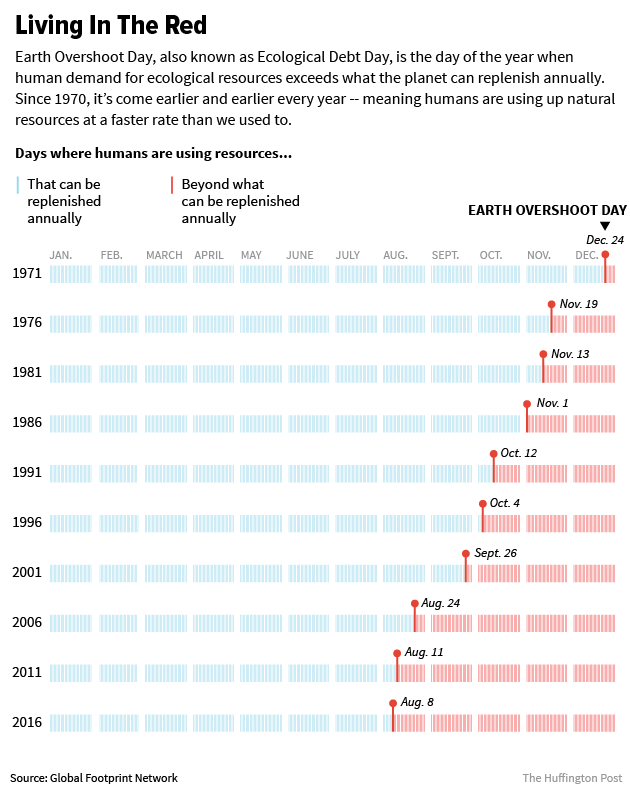 GFN calculates Overshoot Day by comparing the planet’s biocapacity (the amount of ecological resources the Earth is able to generate in a year) with humanity’s demand for these resources, which include cropland, livestock, fish stock, the use of forests for timber, space for urban infrastructure and carbon emissions.

The world’s population currently consumes the equivalent of about 1.6 Earths every year, according to GFN. If population and consumption trends continue, “by the 2030s, we will need the equivalent of two Earths to support us,” the group says. “And of course, we only have one.”

This, however, is not a foregone conclusion.

Concerted efforts by individuals, institutions and nations worldwide to reduce humanity’s ecological footprint could profoundly alter this dire picture. If the global community reduced carbon emissions by 30 percent before 2030, for instance, Overshoot Day could be pushed back an entire month.

“Globally, the longer we go on pretending that natural resources are unlimited, the faster we are jeopardizing the very capacity of our planet to provide us with the renewable resources that we need to feed, clothe, and shelter ourselves,” Winkler said. “Balancing how much renewable natural resources we use with how much is generated is paramount if mankind is to thrive on our beautiful planet. Each of us has the opportunity to participate: the choices we make every day as consumers and as citizens actively contribute to the world that we will leave future generations.”

GFN has launched a #pledgefortheplanet campaign, aimed at encouraging individuals to reduce their ecological footprint. Scroll down for some easy ways you and your friends and family can take action today. Visit Overshoot Day’s website for more information.