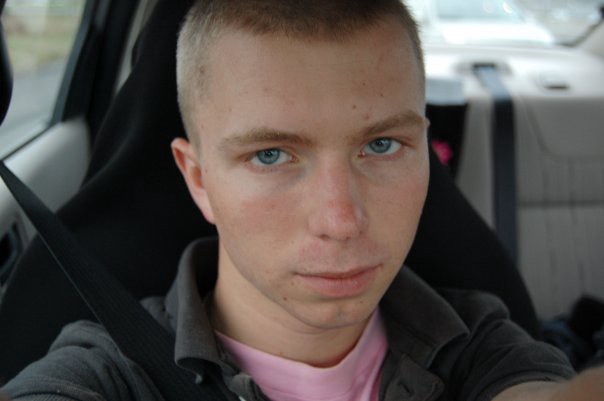 This was a selfie taken in November 3, 2008 prior to my transition.

After weeks of emotion and thought, I've decided I need to tell you something: I am tired of being defined by the world through the narrow lens of a single event that happened in my life several years ago.

Although I have dedicated the vast majority of my life to the principles of transparency, social equality, individual protections, free speech, human rights, and justice, the world usually chooses to define me with this description:

"Chelsea Manning, formerly known as Bradley Manning, was a U.S. Army Soldier who was convicted in July 2013 of Theft of Government information, violations of the Espionage Act and Computer Fraud and Abuse Act, and other offenses, for disclosing hundreds of thousands of military and diplomatic documents for public release, in 2010. Manning was sentenced to 35 years in prison in August 2013."

For many years now, I have just accepted this as fact. For years, I have accepted it as reality. But, now my priorities have shifted. I am faced with a more dire reality: That I am tired of being defined by the world, instead of being allowed to define myself.

When hearing me labeled as a "hero" and a "whistleblower," I take a deep sigh. The bottom line is that I am only human.


In the weeks following the shooting of the Pulse night club, I became very reflective. I began pondering some of life's burning questions: Who am I? What do I want? What are my goals? What is most important?

In general, I am not fond of sweeping broad-stroked oversimplifications. In this spirit, when hearing me labeled as a "hero" and a "whistleblower," I take a deep sigh. The bottom line is that I am only human. When I cut my finger turning the page of a book, I bleed like everybody else.

These last few years, I have been evolving and becoming more real, more intimate, and more human. More like the "real me." More of the woman that I am.

I am a growing, changing, shifting and expanding creature, but much about me is quite normal and boring.

When I was free, I loved binge-watching Seinfeld, 30 Rock and Friends, while eating ice cream out of the tub, with a big spoon, and having left over pizza for breakfast. I was an "all nighter" computer programmer. I was a perky and over-caffeinated barista. I was a clothing store associate, but one who wouldn't hesitate to recommend a customer visit a different store, for cheaper clothes that look similar or better!

I am a still a library beaver and a researcher. I snort when I laugh. I sneeze like a squeaky mouse.

The world today is a very different place than one we lived in back in 2010. 2010 seems like ancient history now. Today, I find myself looking for my place in the world in new ways.

In the meantime, I admit that I want to be seen and understood as the woman that I actually am -- with all of my flaws and eccentricities -- perhaps at the expense of what people expect me to be.

I hope I don't let anyone down, but it just feels better, and more honest, to reveal my boring old self.

I just hope you all will still like me, now that you've met the real me.

A version of this post originally appeared on Medium.