Anderson Cooper has made himself a powerful enemy: the Church of Scientology.

Back in March, Anderson Cooper devoted a week of his show, "Anderson Cooper 360," to a special investigation into allegations of violence and physical abuse within the Church of Scientology. Now, the church has struck back, devoting an entire issue of one of its magazines, "Freedom," to an attack on Cooper and CNN:

...Cooper thinks he can get away with this hogwash and pull off what even the greatest hucksters in history failed to accomplish, i.e., fool all the people all the time.

So in the immortal words of Cooper himself, let's start "keeping 'em honest" by presenting his Posse of Apostates as they truly are...

Under the heading "Anderson Cooper: A History Of Lies," the church accuses Cooper of ignoring the information it provided him and of refusing to speak with top church officials. It also proclaims Larry King to be the only CNN host qualified to interview Scientology leader David Miscavige, and Cooper of supporting an anti-Scientology group that the church calls a terrorist organization.

Beyond the eighteen separate articles attacking Cooper, his ratings and those of CNN, and the guests he brought on during the week-long series, the church also compiled videos. In one of them, it slams Cooper for what it calls his "fantasies of intrepid reporting":

"...when an earthquake reduces Haiti to rubble, there he is, on site in designer jeans or cargo pants, to verify for himself that the villages were indeed reduced to rubble...Anderson Cooper has got to see it with his own two eyes while furrowing his brow to show how much he cares. But this time, Cooper refused to look. "

Later in the same video -- most of which is actually devoted to a rundown of the church's activity during 2009, and not to attacking Cooper -- the church writes what it says is the statement Cooper should have given to viewers, while repeating the same frozen second of footage of Cooper over and over again to make it look as though he is speaking.

Beyond releasing the magazine, TVNewser reports that Scientology members also handed out copies of "Freedom" in front of CNN's Manhattan offices on Monday.

This is not the first time that the Church of Scientology has responded aggressively to investigative journalism. The BBC and the St. Petersburg Times have also come under fire for their reporting in recent years. 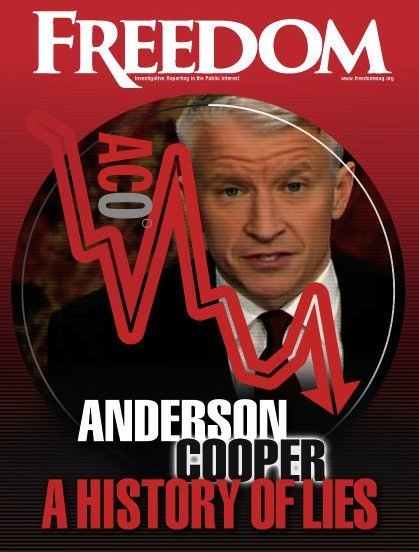 Polling, News, Analysis
All the latest from the 2020 presidential election from HuffPost reporters in the US and around the world
See More
Suggest a correction
MORE: church of scientology Scientology Anderson Cooper CNN media