Apparently, you haven't really tasted chocolate until you've snorted it. At least, that's what a Belgian chocolatier is saying.

Dominique Persoone recently introduced the "chocolate shooter," a catapult-like device that propels small amounts of cocoa powder and other spices into your nose.

"You load it like a gun, putting very little chocolate mix on the machine … Then, you push, and pfffff! The chocolate blows in your nose," Persoone told Live Science.

Persoone says that sniffing cocoa powder is "another way of tasting it," because of the nose's superior ability to detect flavors and scents.

But before you go out and do a line of cocoa powder (which you should not), listen to doctors who say that snorting any kind of powder is risky, even in small amounts.

"Snorting chocolate powder is not safe, because the powder is perceived by the nose as a foreign toxic substance," said Dr. Jordan Josephson, an ear, nose and throat and sinus specialist at Lenox Hill Hospital in New York City.

The powder can damage the microscopic hairs, or cilia, and membranes of the nose, causing problems with their ability to work correctly, as well as possible scarring, Josephson told Live Science in an email. It is not safe to snort any powder, he added. "Putting any foreign bodies -- including smoke, cocaine and/or chocolate powder -- is not safe and is not advised," he said. 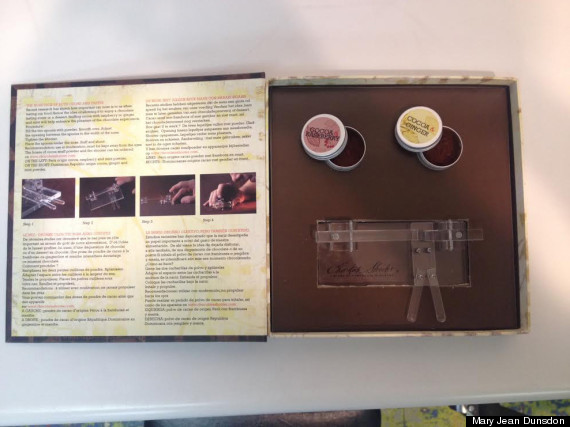 The Chocolate Line store in Antwerp sells kits for the act, complete with the plastic catapult, instructions and a warning against excessive sniffing.

Shops in Canada are already selling it. "Sniffs" of chocolate cost $2 each, and the owner of Commercial Drive Licorice Parlor in Vancouver, B.C. says that at least 60 people have come in to try it.

"The chocolate goes up your nose and settles into your sinuses and oral factory where most of your tasting happens," Mary Jean Dunsdon told HuffPost Canada. "Then you just kind of experience chocolate for a couple hours, actually, in a very subtle manner ... It hits all the same pleasure receptors in the brain [as it would] if you were to eat chocolate."

Of course, she says, everything in moderation.