Aleppo: These days we hear the name of this Syrian city over and over, in the seemingly endless reports of horror. How can one live and work in this city? What's the situation for children living in Aleppo?

In the post below, our colleague from UNICEF, Basma Ourafli, gives us a glimpse into daily life in the city and life before the war. What reads like a horror novel is reality in Aleppo.

As a former English teacher, I'd always loved hearing my students tell their stories. Since I came to UNICEF last year, I've had the chance to speak to kids that I wouldn't have otherwise encountered.

Many of the children I met were grateful that they were able to tell me their stories, and described to me how they cope with the reality of this barbaric war.

Life in Aleppo is extremely difficult. In the beginning, it was difficult for everyone to come to terms with the situation. But over time, we've learned to deal with it. 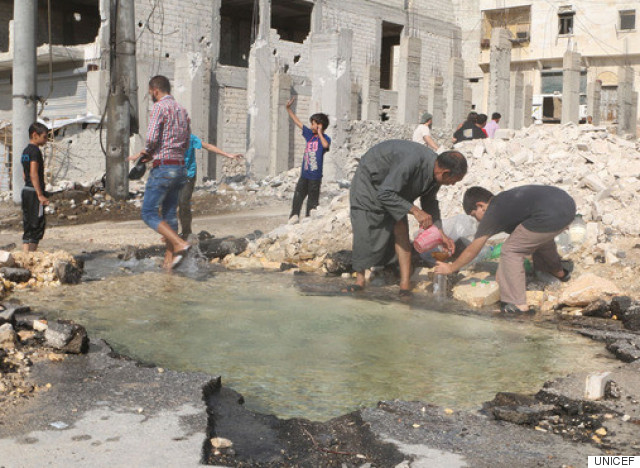 A father and his son fill up bottles with rainwater out of a bomb crater. Sanity water is hard to come by in Aleppo, which is especially dangerous for children.

Before the war, we always had enough electricity and water. These days, we rely on candles. There's usually only electricity for a couple of hours a day -- and sometimes none at all.

The water situation is similar. Before the war, it was completely normal to just turn the tap on at any time. Now we conserve every drop. Every family in Aleppo has a water tank, and when it's empty, we have to improvise. If you wander into a kitchen in Aleppo, you'd see bottles, bowls, and pots, all filled with water.

It's unbelievable how well these children cope with anxiety. Maybe they don't think about the future as often as adults do.

Getting out of the house is dangerous because of the constant shootings and bombings. Before the war, I'd meet my friends outside, we'd laugh, chat, and tell each other the latest stories. Now I stay home. Most of the time we have no idea what's going to happen the next day.

I remember Ramadan last year, just as we completed the fasting period. It was dark when the shooting started. We were scared and didn't know whether or not we should run. The only thought I had was: "Am I going to survive the night?" 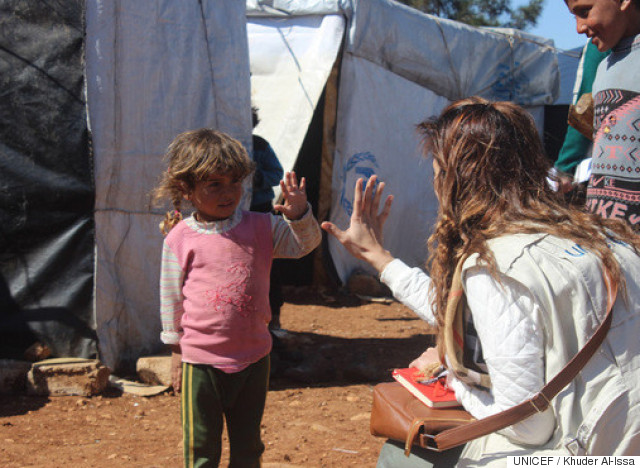 There are no safe spaces for children or families in Aleppo.

In mid-September the kids had a few days off for Eid, the holiday that marks the end of the month of Ramadan. But instead of playing with their families in pretty new clothes, they stood in long lines under the harsh sun for hours to fetch water.

Then the fighting broke out again. It was a terrible time, with so many dead and injured. There are no safe spaces for children in Aleppo.

It's heartbreaking to see homeless children and families on the street -- they live in mosques, schools, or in broken busses.

It's unbelievable how well these children cope with anxiety. Maybe they don't think about the future as often as adults do.

We've learned to value the little things in life, which we usually take for granted. We value every moment.

At the end of October, I was confronted with the full extent of horror this war has brought to the children. It started like any normal work day. Around 8 o'clock, my colleagues at UNICEF informed me that there had been an attack near the Hatem Attai Elementary School.

We immediately ran to the Razi Hospital -- one of only two functioning hospitals in Aleppo. We feared the worst. Nothing can prepare you for the sight of a hospital in a war zone. I saw people in tears who had just lost their family members. I saw people covered in blood. 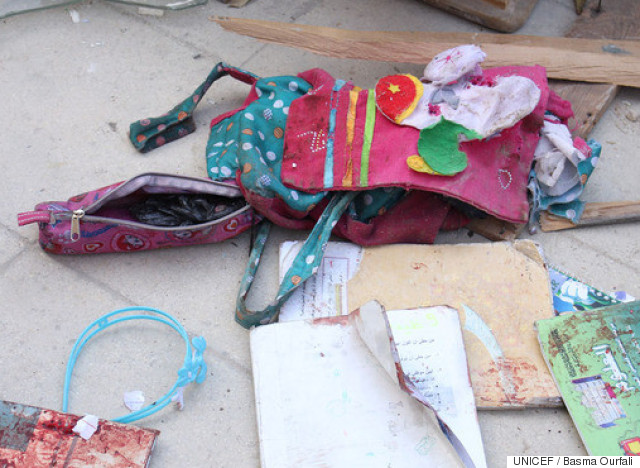 On the ground lies the notebook of Lamar, an 11-year-old girl. She was on the way to school with her sister. Since the beginning of the civil war in Syria five years ago UNICEF has counted over 4,000 attacks on schools, even though they are protected under international law.

The head doctor informed us that two children had not survived the attack on the school and two more children were still in in the Intensive Care Unit.

When we walked into the ICU, doctors and nurses were in the middle of an attempt to revive the small, helpless body of a child with electric shocks. The heart monitor showed a flat line. A continuous, monotone beep told the truth of the terrible situation.

I stood in the corner of the room, still holding a camera in my hand, and felt like I was a stone, struck dumb by what I had just seen. The child was dead; it had died before my eyes. I had to get away from there.

When I stepped out into the hall, I saw the father of the child, waiting for news. I'll never forget the look on his face. A mix of hope and fear. I ran further down the hall. I couldn't bear to look the father in the eye or to be there when he found out.

We went down the stairs to the basement, and I knew I was about to see something terrible once again. The two dead children lay on a hospital bed.

In Aleppo, we experience kidnappings, fighting, and we are constantly under siege. We've all tried to keep ourselves calm. We would tell ourselves over and over: "It will end this year." But we've stopped saying that.

Despite the tragic reality, we try to maintain some semblance of a normal daily life. We're happy at weddings and graduations, and we even run little businesses.

I've started taking violin lessons and I know of many other people who have started playing musical instruments. We've learned to value the little things in life, which we usually take for granted. We value every moment. 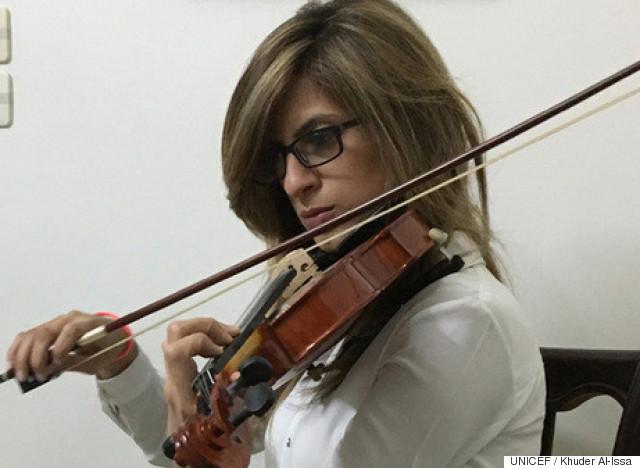 The positive side of the war is that people in Aleppo have built strong relationships with their loved ones. We spend a lot of time together. We talk, listen to music and knit together.

We've also started reading more books -- personally, I've decided to only read positive stories. There's no reason to read tragedies when all you have to do is look outside to see the tragic consequences of war.

This post originally appeared on HuffPost Germany and has been translated into English.