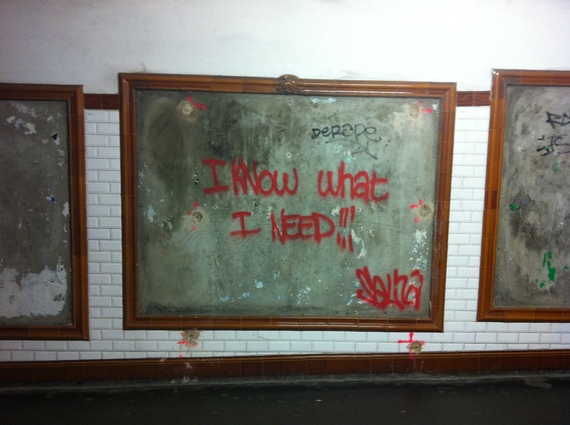 One of my friends is regularly triggered by his wife. There's one thing in particular that really gets to him. She talks over him while he's talking, especially in conversations with their friends.

His response is to blame her because he believes that making her wrong will get him what he wants. It's never true, but he tries it anyway.

They've been doing it for so long that they're stuck in a pattern. He protests her behavior by saying, "I won't put up with this! You can't treat me like this!" And then he puts up with it, and she continues to treat him like that.

Sometimes, his wife looks for an opportunity to get back at him. And she knows how to do it because he's shown her where his buttons are.

He has a button that says, "If you talk while I'm talking, I'll get upset." So whenever she wants him to get upset, she talks while he's talking.

We're constantly teaching the people around us how to treat us through our response to what they do. If we show them that a certain word or look will get a consistent reaction from us, we're training them to use that word or look whenever they want that reaction.

And when we've shown people where our buttons are, how they're activated, and what our auto-response will be, it's really not appropriate to blame them for pressing, "Push here."

What could my friend do that would work better? He could make himself unavailable. He doesn't necessarily need to go away. He only needs to not provide the response his wife is seeking, because people don't keep doing what doesn't work anymore.

We can create positive change in our relationships, but we can only do it through ourselves, not others. So, if we want people to act differently toward us, we'll need to begin by acting differently ourselves.

Until we change, nothing will change.

We'll need to make a conscious decision to stop being triggered by what people say and do, which will deactivate our buttons and give us back our power.

We'll also need to examine whether our beliefs are valid. My friend needs to look at what he truly wants and whether making his wife wrong is getting it. And he needs to figure out how he can achieve what he wants without making her responsible.

First though, he needs to stop delivering his predictable response. When people can't trigger the reaction they want, they'll eventually stop looking for the buttons. But first, they'll try harder to find them.

So it may get noisy with his wife for a while. And he may actually need to leave the conversation, the room, even the building. When he returns though, it's super important that he support every positive thing she does.

That's how we train people constructively. As my friend pays more attention to the consequences he sets in motion, instead of blaming her for them, his communications with his wife will improve.

The key is to do it on purpose. When we feel triggered, if we will change our usual response, people will change their behavior. And when we no longer take what others say personally or believe that we're a target, we'll feel more secure in our relationships.

If we won't settle for less than that, all our relationships will become healthy - and those that can't will go away, which is also healthy.

For more posts by this author, please visit her blog at gracederond.com. This article was originally featured on The Good Men Project.

Grace de Rond is an author on relationships and blogs at gracederond.com.