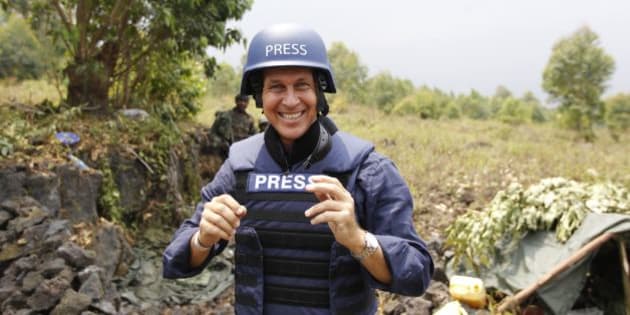 In prison, one of the most disturbing things is a sense of isolation -- the fear that you are on your own, with nobody to fight your corner, nobody to shout by your side or get mad on your behalf. And, if you are genuinely innocent, caught in a painfully slow judicial system and with no obvious end in sight, the isolation can start to play games with your mind.

So it was with the Al Jazeera Three -- myself, Egyptian-Canadian producer Mohamed Fahmy, and Egyptian producer Baher Mohamed. We were arrested on December 29, 2013, and I was thrown in a freezing-cold 3sq m police cell with 16 people jammed inside it, expecting at any moment to hear the officer turn the lock and announce that it had all been a terrible mistake. For me at least, that wouldn't happen for another three prisons and 400 days.

Throughout it all, as news of our story began to spread, people began to write. Not just a few letters from time to time, or even a few hundred, but thousands. The notes were extraordinary both in their content and in their volume: some wrote simple messages -- often nothing more than a sentence or two to express their support and their hopes that we would soon be released. Sometimes the notes were wonderful, gossipy accounts of family life, reminding us that the ordinary and mundane is as beautiful and important as the dramatic and spectacular. And sometimes they were thoughtful, almost meditative reflections on our situation and how it had inspired them to act. I even got poetry.

The letters made us appreciate two vital things. First, that we were not alone. If we ever felt isolated, or lonely, all we had to do was skim through those notes and imagine the authors with us. And pretty soon, the cell would be crowded with people -- young and old, professional colleagues, friends, acquaintances and the many hundreds of complete strangers who'd somehow been moved to write.

But the letters also gave our imprisonment meaning. They helped elevate our struggle into something more elemental. It became a battle for a set of principles. For us, as long as we represented those principles -- the freedom of expression, the public's right to know and the rule of law, we felt the strength of that higher purpose. The fight was no longer just about us, but about the things we had come to represent.

An edited extract from Peter Greste's foreword to Prison Post: Letters Of Support For Peter Greste, which is available in print and as an ebook from editia.com and good bookstores.

Editia stands with Peter Greste and his colleagues as they fight for freedom and to clear their names. #JournalismIsNotACrime #FreeAJStaff

Peter Greste will speak at the book's launch at Berkelouw Paddington in Sydney at 6.30pm tonight. Please RSVP via the Berkelouw website.